Get Crowded - Using social media to crowdsource your marketing

It was bound to happen. I mean, all the conditions were right. The economy fell like a sack of flour, forcing everyone to start doing a lot more with a lot less. We were suddenly faced with a large and talented unemployment pool. Meanwhile, social media took off like a rocket. Given these conditions, it’s no wonder crowdsourcing really exploded.

Crowdsourcing is a relatively new take on an old idea. The word “crowdsource” is a combination of the words “crowd” and “outsource.” Outsourcing has been around forever—the IT and sales industries are infamous for putting inexpensive call centers halfway around the world. Crowdsourcing is the same concept, except instead of hiring a specialized company to do the work in question, companies open up the job to the public at large. Anyone looking for a little extra work can take a shot at the project.

Leverage the power of the public

A good example of this is LG’s 2010 “Design the Future” competition. Using the popular crowdsourcing platform crowdSPRING, LG offered cash prizes (up to $20,000) to the person who submitted the best design for what the phone of the future might look like.

But wait. Doesn’t a company like LG have a Research and Development department for things like that? Sure, probably. But crowdsourcing is cheaper, and it allowed the company to tap into entirely new resources by way of Joe Public. 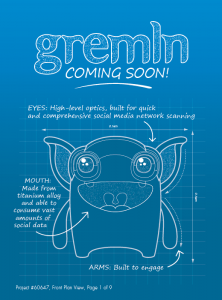 Once upon a time, there was a tool called Twaitter. It was a good tool, strong and well-loved, but over the course of time, Twaitter evolved into an even better, and stronger, and (hopefully) more well-loved tool called Gremln. And while we’re not quite ready to unveil the complete Gremln tool suite just yet—though believe me, your patience will be very well rewarded—we are extremely happy to announce the new Gremln Blog.

See, for those of you have have been using Twaitter to schedule and manage your tweets, you’ve already seen a small glimpse of what Gremln will have to offer. And if you’re brand new to Gremln, welcome aboard! We have quite a few social media tools and tricks up our digital sleeves, and I’m pretty sure you’ll love what Gremln has to offer.