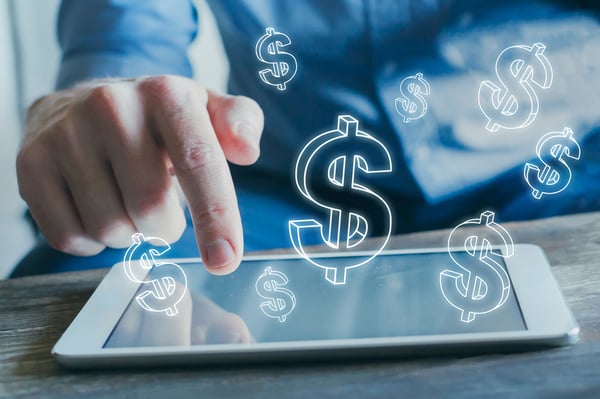 To find out how banks are now managing social media—what they’re doing right and what obstacles still persist—the American Bankers Association surveyed more than 430 banks of all sizes. The 2019 report, The State of Social Media in Banking, provides a detailed status on where banks stand on social—and what’s changed in recent years. Here we take a look at how banks are measuring the success of their social media programs.

This mixed report card may be a reflection of the way social media is being measured. For starters, 34 percent of banks in our survey don’t measure the impact of their social media use. It’s hard to be pleased with results you don’t know about. The top categories of metrics tracked, in order of perceived importance, were:

None of these measures links social media activities to business results. Sometimes that connection could be clear—a campaign led to x clicks on the blog which led to y click-throughs to an online loan application, for example. But more often the benefits are intangibles—awareness, relationship-building, goodwill—that lead to business wins in ways that are almost impossible to trace or to attribute to social media alone.

“The banks that are going to perform well aren’t on social just for the sake of being on social,” says Doug Wilber, CEO at Gremlin Social. “They’re on social because they have a specific business need and a business goal that they want to achieve, and social media is an intrinsic part of that.”

“The challenge has been that many banks are trying to just leverage the metrics that come from the networks natively to measure the likes, shares, how many retweets,” says Wilber. “I call these vanity metrics—how popular am I? And to me that’s not necessarily the right way to approach it. The right way is to measure how the bank is using social as part of an overarching communications strategy, to put interesting and relevant content in front of the customer so that when customer is ready to make a financial services decision, the bank is top of mind.”

In short, the social media strategy needs to be an intrinsic part of the pathway to a business goal. Wilber points to First State Bank of St. Charles, which found that loan officers who are active on social media tend to close one more loan per month.

At Commerce Trust Company, a division of Commerce Bank, the main focus of social media is prospecting, so social media encounters are tracked through to action, says Paul Lewis, CMO at Commerce Trust. “Obviously we track impressions, how many times our message is being served up and building our brand awareness, but ultimately we’re tracking clicks that then drive visitors to our website.

“Once they’re on our website, we have a whole set of analytics to measure just how much they’re engaged with us. Did a prospect go to our locations page, our ‘contact us’ page, or raise their hand by filling out a form asking someone from the bank to call them? We monitor a lot of different types of conversion, levels of engagement and repeat engagements with us to come up with an engagement score. Based on those results, we can then see if we’re sharing content that is worthwhile and informative, or we need to circle back and rethink the editorial calendar for the year.” 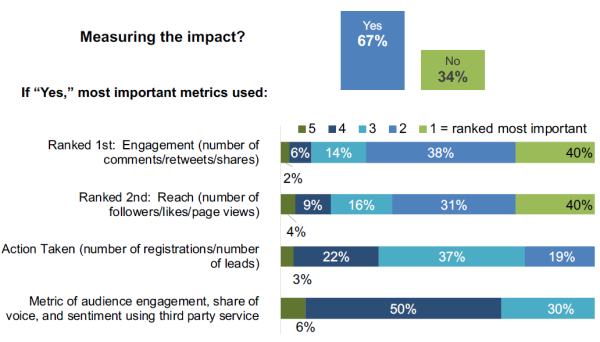 The soft benefits of social media

If the primary goal of the social media program is community goodwill and brand awareness, success can be fairly measured on how many people respond positively and like and share your content.

“Market visibility has been the largest thing for us,” says Natalie Bartholomew, VP and chief administrative officer at Grand Savings Bank. “We have been in growth mode ever since I joined the bank. We originated in northeast Oklahoma, so that’s where the majority of our market share has been. As we have moved into northwest Arkansas, which is more populated and urban, our expanded social media presence has certainly increased our visibility in the community. People know who we are now. They know who works for us. That awareness has changed dramatically over the past 24 to 30 months. The board is recognizing it. Management is recognizing it. That’s a win, and it’s essentially for free.”

Beyond the direct effects, a bank’s social media presence can also generate more local media attention for the bank, creating a rippling circle of mentions, interviews and free advertising.

“It’s so inexpensive,” says Hollie Brown, AVP and marketing manager at Peoples Bank. “We do everything in-house, even the videos, so our typical costs are about $100 per campaign. Our annual expenditure for social media is probably less than $2000.”

Social media can potentially perform similarly to advertising, according to Gremlin Social’s Wilber. One bank’s analysis showed that if it had 50 broker/dealers post on social media, each one with a network of about 500 followers, the bank would be within striking distance of the impressions of a display ad, for a more favorable CPM (cost per thousand impressions).

The State of Social Media in Banking 2019

Want to see the full report? Download it now!