Don't Tweet That! The Dangerous Reality of the Social Family

It’s probably safe to say that by now, most of us live in a healthy state of caution when it comes to social media. We’ve read the cautionary tales so selflessly provided by J.P. Morgan, Epicurious, and Justine Sacco, and most of us have decided that, yes, we should exercise a little care on the keyboard.

It’s a proven fact, folks: reckless tweeting can, at worst, get you fired; at best, completely trash your reputation (and that of your business).

“That’s all well and good,” you might say, “but I am a careful tweeter! I would never post anything unseemly!” That may be true, and I hope it is.

But what about your family? Are they being as cautious as you are? The truth is, what your family tweets could land you in professional hot water.

Back in 2010, a Miami school headmaster named Patrick Snay lost his job after the school decided not to renew his contract. Snay sued the school, saying they discriminated against him because of his age, and he also claimed that they made life difficult for his daughter, Dana. In 2011, the school settled with Snay out of court and awarded him $80,000. Things were looking up for the Snay family.

But then Dana posted this little gem on Facebook:

“Mama and Papa Snay won the case against Gulliver. Gulliver is now officially paying for my vacation to Europe this summer. SUCK IT.”

It didn’t take long for that little missive to catch fire and spread through Dana’s circle of friends, many of whom attended the same school. The administration at Gulliver found out about it, and guess what. Snay had signed a confidentiality agreement with the school saying he wouldn’t disclose information about the settlement, and his daughter’s post violated that agreement. The $80,000 agreement was nullified, and Snay got nothing.

Exhibit B: Trouble in Hong Kong

Chai Yan Leung is the daughter of C. Y. Leung, the Chief Executive of the Hong Kong Special Administrative Region. In September, amidst the backdrop of a massive public protest against the Hong Kong government’s electoral process, Chai Yan posted a picture of herself wearing a necklace on Facebook with a long caption that included the lines:

“This is actually a beautiful necklace bought at Lane Crawford (yes – funded by all you HK taxpayers!! So are all my beautiful shoes and dresses and clutches!! Thank you so much!!!!) Actually maybe I shouldn’t say ‘all  you’- since most of you here are probably unemployed hence have all this time obsessed with bombarding me with messages.”

Boy. That sure dumped some weapons-grade kerosene on the old protest fire.

Jessica McCloughan, wife of Washington Redskins GM Scot McCloughan did the already controversial team no favors when she threw shade at ESPN reporter Dianna Russini via Twitter. Unhappy with the reporters team coverage, McCloughan tweeted a disparaging remark accusing Russini of trading, er – favors of the intimate variety – in return for inside scoop about the team.

In short order came the ubiquitous “the account was a fake” routine, but the jig was up when McCloughan issued an apology for the tweet, both to Russini and ESPN.

The interesting part is that this incident isn’t the first; there is an earlier tweet from McCloughan to Russini indicating a possible affair between her husband and the reporter. No one has lost their job over this kerfuffle (yet), but certainly lends no credibility to a franchise already struggling with bad PR.

It should go without saying that if you’re a fugitive from justice, social media should probably be pretty low on the priority list. Unfortunately for Joaquin Archivaledo Guzman Loera, aka “El Chapo,” his son couldn’t resist a quick tweet that included a location tag.

El Chapo is kingpin of the Sinaloa drug cartel, and has been on the run since escaping Altiplano Federal Prison in July. The post, allegedly from an account belonging to El Chapo’s son Alfredo Guzman, includes two men with faces obscured by emoticons, and another man in the background who appears to be El Chapo. The tweet said “Satisfied here, you already know with whom.” The location tag shows Costa Rica. Authorities aren’t sure if the tag was an intentional diversion to throw police off, or if he inadvertently outted his dad with the worlds most mis-timed photo bomb.

Guzman has yet to be apprehended, so for now it looks like the fugitives have caught a lucky break in spite of the son’s itchy Twitter finger. 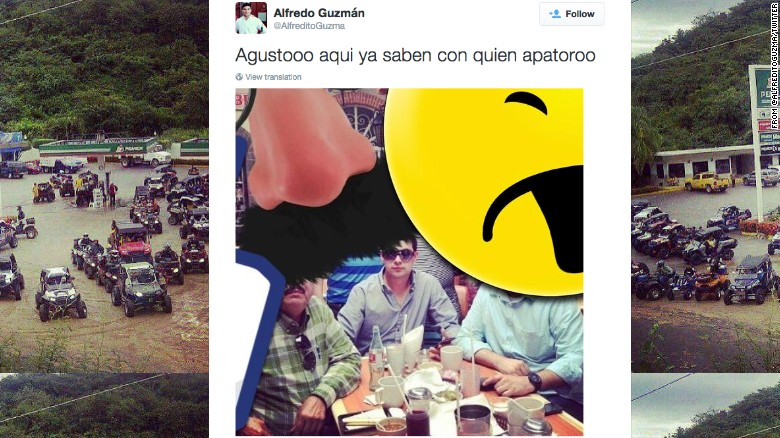 Let’s hope not. But who can say? Access to the social web is everywhere, and there’s no telling what your family members might tweet at any given moment.

Unfortunately, it’s not just enough to make sure your tweets are appropriate. Your business can be impacted by the social messages of others, even when those messages are written and posted innocently, without malicious intent.

And there’s a lot more at stake here than just your business. If your kids are reckless tweeters, there’s their own reputation and safety to consider. Consider the fact that recently, a group of hackers swiped about 200,000 photos from Snapchat, a social media network that supposedly deletes images after a set (and short) period of time, and started posting some of them publicly. Snapchat is infamous for being used among teenagers as a--*ahem*--racy visual delivery system. Now, because so many teens didn’t know or didn’t care about the repercussions of their social media actions, they’re at pretty serious risk.

Like I said. There’s a lot at stake in the social space.

So what’s a parent to do?

I think it’s time to advocate for frank family discussions about social media and the lasting impact of careless messaging. Social media is a part of our daily lives, and as such, it’s reasonable, and intelligent, to have an open dialogue with your children about the pros and cons of social messaging. Businesses and reputations can take serious blows from irresponsible tweeting, and it’s never too early to start a discussion about social media sensibility.

And it might not be a bad idea to implement a family social media policy. If you’ve got kids who live in the social space, try drafting up some general messaging guidelines, things like “Never talk about family financials” and “Be careful with your language.” I know, I know, family policies are a teenager’s worst nightmare. But I bet there are plenty of things you do on Facebook that embarrass your child. Be equitable and give your kids a chance to lay down some guidelines of their own. They can request that you never post a baby photo without their express permission, or that you never comment on their relationship status, or that you promise to never, never share your stockpile of embarrassing stories on Facebook.

Hey, you’re not the only one looking to protect a reputation.

When you create your family policy, work out some sort of reward system for sticking to it. Go out for ice cream every Saturday that comes at the end of a mishap-free week. Take the family to Disney World after a great social media year. (Disney World’s fun, right? Do teenagers like Disney World? No? What do teenagers like? Twilight? Take them to meet some vampires. Heck, I don’t know, let your kids pick their own rewards for a social media job well done.)

Implementing this sort of family policy helps everyone in the household to be smarter on social. It’s can be a great tool for keeping your children and yourself out of hot water.

I bet Patrick Snay wishes he’d come up with some sort of social media plan with his family.