Background Check: How to keep your visuals from hurting your image

Welcome to the age of the image, where everyone strives for video virality and photos reign supreme. The major social networks have put a strong emphasis on pictures and video. Twitter showcases them in the timeline, Facebook gives them more weight in their algorithm, Instagram gives you a plethora of filters and editing tools, and even LinkedIn has started flashing visually engaging mosaic layouts for its Author pages. As far as the networks, and therefore the users, are concerned, if your message doesn’t have a visual, it’s likely little more than static.

And so, just like in high school, it’s all about the image.

Fortunately, technology has made amateur photographers of us all. Most of us are usually no more than an arm’s length away from a camera. (I hear some of these cameras even make phone calls! Oh, technology, where will you go next?) It’s quick and easy to snap off a shot or film a short video, and it’s just as easy to post that visual up on the network(s) of choice.

But there’s a slight problem here. You see, sometimes it’s too easy to share your images. Sometimes we go on autopilot; take out phone, strike a pose, selfie ourselves, repeat. But the danger is, even though you can control the saturation and the hue and the crop and the tilt shift, there’s one thing you can’t always control in your photo.

“So what?” you might say. “The background is just a background! That’s why they call it the background, Ryan! How much damage can it do?”

Good question. Maybe we should ask Missouri Governor Jay Nixon, who tweeted this picture on Election Day. What should have been a stirring example of democracy turned into a searing sea of derision. The Twitterverse wasted no time cracking jokes (get it?!) at Governor Nixon’s expense. His message of “Come out and vote!” was completely overridden with a much more shareable message of “OMG, look at this!”

The background of your photos and videos can definitely hurt your message. Here are four things to look out for next time you snap a shot: 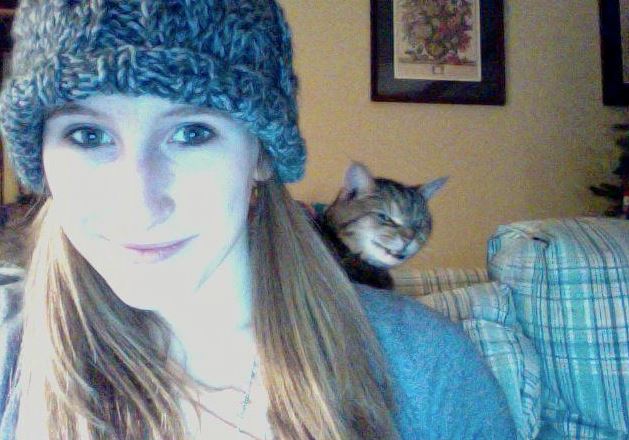 Man oh man, is there anything more fun than seeing a great photo bomb? (The answer is yes; seeing a great cat photo bomb.) Nothing dilutes your visual impact faster than some lunatic making faces in the background. Before you post, make sure your photo is bomber-free.

Don’t get me wrong. I love Scotch tape. It’s saved my life on at least seventeen different occasions. But it doesn’t belong in your photo background. What I mean is, don’t “stage” a background by taping signs or pictures or logos to your wall. And don’t choose a wall that looks like it might be someone’s laundry room. A bare, taupe-colored wall? Where do you work, your mom’s basement? In fact, you know what? Don’t take any photos anywhere that anyone might consider “crummy.” Crummy backgrounds damage the heck out of credibility. Take your photos in front of non-crummy backgrounds only. If you don’t know if your background is crummy or not, ask a friend. Friends love to tell you when things are crummy.

Don’t take photos in the same location every time. People want to see variety in your images, and the less of that you have, the less likely people are to continue engaging over time. Also, if you’ve followed some of the above advice and take all of your photos in an especially fancy closet in your office, people are going to get wise to the fact that your fanciness may be fraudulent. And there are few things worse than fraudulent fanciness.

The woman with the slightly exposed posterior in Governor Nixon’s photo probably really wishes he’d checked the frame for collateral damage. Sometimes things happen accidentally within the frame, and you’re powerless to stop it. Be on the lookout for background violence, unexpected goofiness, flailing animals, inappropriate hand signs, and, of course, inappropriately exposed skin.

Believe it or not, your photo’s background says a lot about you. It speaks to who are you, what you do, how seriously you take your social messaging, and how much attention you pay to detail. Huge business deals have gone sideways over a single, poorly placed pose.* Next time you snap a photo or capture some video, pay careful attention to what’s going on in your background.

Your image depends on it.

*I mean, I assume they have. I couldn’t find any headlines to support it, but it makes sense. Seek your feelings. You know it to be true.