One of the difficult things about social media is that it gives distraught customers a direct (and very public) line of complaint to the company, so a good social media strategy should always come equipped with a customer relationship management plan. With the right CRM, your social detractors can actually end up being your most outspoken fans. Because of this, distraught customers posting negative tweets actually present a real opportunity for savvy business managers.

All RAM needed to do to turn this bad situation to their advantage was own up to the problems and dedicate some time and attention to responding to the negative tweets and Facebook posts. That’s what a responsible company of the social media age does. But instead, the managers of the Hot Chocolate run took a decidedly pre-social approach to CRM; they addressed the complaints with blanket messages instead of individualized responses and continued putting out “business as usual” marketing content. 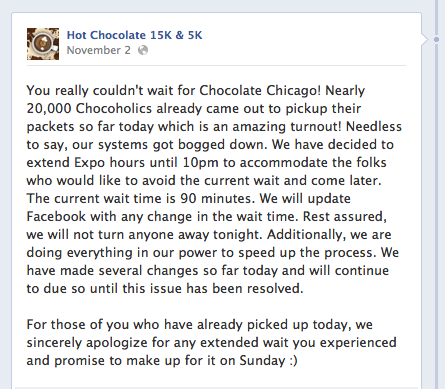 This message, posted by the company on its Facebook page, was a step in the right direction, but there are a few issues with it. First of all, they tried to spin their customers' frustrations into a positive company spotlight by basically saying, "Wow, you guys are all waiting for so long because we're so popular!" That's not what angry customers want to hear. Note that the apology doesn't come until the very last sentence.

The second issue with the response is that instead of leading with the active steps the company will take to rectify the situation, they explained that runners would be able to pick up their packets, no matter how long they had to keep the expo open. In other words, "Yes, you've been waiting a long time, but don't worry; no matter how much longer you have to wait, you will get your packet!" That, also, is not what the runners wanted to hear.

The third issue is that while RAM posted a handful of these blanket statements on their social networks, they didn't individualize their responses. They didn't address the great majority of angry tweets and Facebook posts. In fact, a cursory overview of their Facebook page suggests that the only Facebook posts they did respond to were the ones asking simple questions, like "Where can I exchange my Hot Chocolate runner's sweatshirt," and "What time do things get started tomorrow?" RAM answered these questions readily, yet ignored the angry questions about what they were going to do to correct the problem. This showed their customers, "Yes, we're here, we're listening, but only to the problems we want to hear."

RAM’s refusal to acknowledge the vast majority of their angry customers in any sort of personal, “I understand your frustration” kind of way made a bad situation much worse, and they are by no means unique in their handling of the problem. According to a study from Maritz, only 29% of companies respond to customer complaints on social media. Heck, company response rates are so bad that most of the complainers don’t even expect a response. According to Arnold Worldwide, an astounding 40% of people who complain about a company on social networks don’t even expect any sort of response.

But a response is exactly what they should expect, and it’s what they should get. Social networks give us such incredibly direct lines to the people who are most likely to spend their money on our products and services, why wouldn’t we want to treat them with special care?

Companies that ignore their social media fans, or that pick and choose which fans to respond to, are operating in a decidedly pre-social mentality. One-way communication is no longer the norm, and treating  Facebook like a weekly newspaper instead of the incredibly interactive platform that it is only leads to more customer dissatisfaction. In the past, companies could afford blanket responses to customer anger, but no longer. Now they need to step up their game and handle issues on a personal, interactive level.

Fortunately for the Hot Chocolate organizers, the race itself went over well with the crowds, and social messages began to lose their ire on Sunday. Hopefully, they’ve learned from their mistakes this time around and will work to create a more customer-friendly social atmosphere in the future by ditching their pre-social mentality.

How often do you see companies using a pre-social approach to social media marketing? Do you expect companies to respond to your Twitter and Facebook complaints? We'd love to hear from you in the comments below!