Merge Confusion: What to do when traditional promotion and digital marketing don't mix 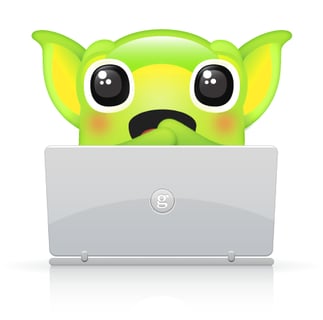 As someone who works in social media, it’s always exciting to see small businesses trying out new digital marketing tactics. The fact that this coffee shop has so fully embraced the QR code that the managers spent money to have them printed on company t-shirts is proof that there are small business owners everywhere are not just recognizing, but taking advantage of the vast opportunities presented by digital media. The desire to innovate is there. The problem is, it’s sometimes difficult to translate that desire into an effective promotion. It’s easy for us to get so excited about the fact that we’re using new technology that we don’t take the time to evaluate how we’re using it.

The t-shirt QR code is a great example.

The first problem with putting a QR code on someone’s sleeve is the location of the image on the shirt. The sleeve is an awkward surface to scan. T-shirt sleeves are rounded and flimsy, so to get a decent scan of the code, you’d need to have the barista smooth down her sleeve and hold it flat against her arm while you scan it. I’ve scanned QR codes on completely flat posters measuring 10 feet by 10 feet that took several seconds for my phone to focus in on. Trying to scan one from someone’s shirtsleeve must be a nightmare.

But perhaps more to the point, it’s just plain weird to ask someone to hold still and pose so you can digitally scan one of their body parts. Sure, as far as body parts go, a bicep may be a pretty tame place to hover with your smartphone, but still. It’s a body part. It’s pretty awkward.

The second problem is the geographic location of the person wearing the QR code. The barista is in the coffee shop. There is literally no better place in the world for you to introduce me to the finer points of your brand than when I’m in your brick and mortar store. So why bother asking me to scan a QR code? Surely there are better ways to alert customers about your specials than by sending them to a slowly loading mobile website that lists them. You could, for instance, just tell them, since they’re already standing in your store and have already decided to make a purchase.

I think sometimes we get so wrapped up in trying out “the next cool thing” that we forget what makes these new technologies so hot in the first place. QR codes are useful for quickly directing people to a mobile website where they can glean more information about a product or company. They’re great for placing on store windows with heavy foot traffic where pedestrians can say, “Gee, I’ve always wanted to know more about Company X, I’ll scan this and see what they have to say.” But once you’re in the coffee shop, you’re in the coffee shop. You’ve already heard what the company has to say. You’ve made your purchase decision, so what further good can the awkwardly placed in-store QR code hope to deliver?

Another great example of good technology gone bad is the use of QR codes on highway billboards. I understand what problem these marketers are trying to solve; how do you get your billboard advertisement to resonate so strongly with someone that they’re still thinking about your website an hour later, when their commute is done and they’re sitting in front of a computer? In theory, the QR code on the billboard bypasses that problem altogether. If you scan the billboard’s code, you’re taken directly to the company’s mobile site, and the hour-long attention deficit crisis is averted. But in the first place, it’s almost impossible to hold your phone camera steady for any length of time when you’re cruising down the highway. More importantly, it’s just plain dangerous. The last thing I want the person in the lane next to me to do is pull out his phone and try to scan a billboard at 70 miles per hour. In a very real sense, the billboard QR code promotes unsafe behavior.

And just like that, a company goes from digitally innovative to socially irresponsible.

One other great example is Shazam’s interactive commercials. Shazam, the popular music identification app, recently started partnering with major retailers like Old Navy to make interactive television ads. You’ll know one of these ads when you see it because the black, white, and blue Shazam logo will appear in the corner of the screen. The idea is that when you see the logo, you should open Shazam on your phone and have it analyze the commercial’s audio, which will then take you to specially created interactive content that you can only access through Shazam. In theory, I think this is a great idea. It rewards Shazam users with “members only” content, and Shazam’s partner companies can design the content to fit whatever marketing campaign they’re currently executing. It’s some pretty slick cross promotion. But, of course, there’s a downside. Most television commercials are thirty seconds long, and Shazam can take ten seconds or more to fully analyze a song. That means you have less than twenty seconds to pull out your phone, wake it up, open the app, and hit “Touch to Shazam.” If you’re not watching TV with your phone at the ready, there’s a good chance the commercial will be over before you capture the song and get the extra content. Not only does this make the experience frustrating, but from the company’s perspective, you, the customer, just spent 30 seconds futzing with your phone instead of watching the commercial.

This disconnect over digital media integration seems to manifest itself most often in times of “merge confusion,” or when we try to merge traditional promotional methods with new, digital strategies. Billboards and t-shirts can be great promotional pieces, but they’re not good fits for QR codes. Television advertisement is one of the most impactful types of marketing, but it’s severely limiting from an audio recognition point of view.

It’s an understandable source of confusion. After all, technology has given us some really interesting and engaging methods of digital communication, but your customers live in a very physical world. Before they can explore your digital content, you need to make them aware of it in a tangible way. You have to showcase your QR code on a tactile background. You have to link your Shazam content with some sort of audio marketing piece. You have to promote your social networks somewhere besides your social networks. At some point, your digital strategies are going to cross paths with your traditional, tangible media. When that happens, how do you avoid merge confusion?

1. Is this a good fit for my campaign?
Before committing to a any digital strategy, you should make sure it’s right for your marketing campaign. If you want to use a QR code, make sure you can create worthwhile content that’s easy to access on a mobile device. If you want to hold a photo contest on Instagram, make sure your theme is appropriately visual and ties solidly into your product. Never take a hot new digital approach just because it’s the hot new digital approach. Some digital tactics will be a good fit, others won’t be. If the next one isn’t, save your resources for a tactic that is.

2. Is this a good fit for the medium?
Once you decide on a digital strategy, you’ll need to promote it…but how? What promotional medium will you use? If your digital strategy involves mobile device photo capture, maybe the Chicago elevated train is a better promotional platform than an employee’s t-shirt. If it involves exclusive Shazam content, maybe a 2-minute YouTube video is a better fit than a 30-second television commercial. When you’re choosing how to promote your digital media, put yourself in the end user’s shoes. Walk through the steps of your own promotion. If it’s awkward for you, it’ll be awkward for them.

3. Is this a good fit for the geographic location?
Is the side of the interstate the most logical place for your “text to donate” message? Common safety sense and several states’ driving laws say no. Instead, place your promotion in a spot where cell phone use is common (and safe). Is your coffee shop the best place to ask people to scan a QR code to learn something about your new product line? No, of course not. Your employees are the best resource for disseminating that information. Instead, place your promotion in a spot where people are likely to find themselves feeling tired and in need of a pick-me-up. Find a place that makes geographic sense.

There’s no doubt about it—traditional marketing and digital media need to coexist peacefully within our marketing plans. They don’t always work together seamlessly, but with a little careful planning, you can find the combinations that make sense, both for your customers and for your brand.

Do you have any memorable merge confusions you’d like to share? We’d love to hear them! Tell us in the comments below!