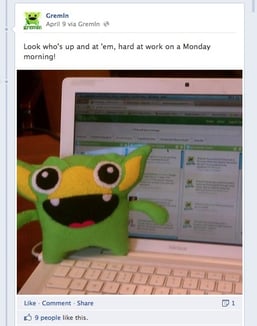 Pictures are great for your company for several reasons. First of all, they’re easy to share. Literally. When you update your status on your company’s Facebook page, your fans can either like that status or comment on it. But when you upload a photo, that magical “share” link appears, making it incredibly easy for your fans to repost your images to their own circles. They can’t share your status updates, but they sure can share your photos.

Secondly, images are quick to digest and easy to remember. Cliché as it may be, a picture really is worth a thousand words, and there’s no faster way to get all one thousand of those words across than to put them in an image. A picture can tell a much deeper and more emotional story than your status updates ever will, especially when you’re posting via Twitter, where you’re restricted by that pesky 140-character limit. Linguistics professor Mark Lieberman says that the average length of a word on Twitter is 4.8 characters…so if a picture truly is worth a thousand words, than tweeting that picture one time communicates your thoughts better than 34 separate tweets.

Thirdly, people just seem to like interacting with photos. Your social media fans and followers are more likely to retweet, like, share, or comment on your post if it’s image-based. And when it comes to digital marketing, this interaction is key. Each time a fan engages with one of your posts, she puts your company on display to her own social circles. Social media interaction can be a huge catalyst for brand growth, and since photos are the best drivers of that interaction, strong images can really accelerate brand success.

Finally, photos can really humanize your company in a concrete and relatable way. Photos give your customers the chance to peek behind the content curtain and see what really makes your company tick. Copywriters can spend hours, days, even weeks on a marketing message, carefully massaging the words in order to illicit the best possible response, and of course there’s tremendous value in that. But an Instagram photo tells the story of now. It says, “This is who we are, and this is what we do.” And there's value in that, too. Real, monetary value.

Social media photo sharing was worth one billion dollars to Facebook. How much will it be worth to your brand?