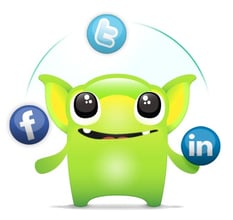 It's hard to believe that it's already the first Friday in November. Time is flying here at Gremln as we get deeper and deeper into our private beta tests. With all the work we've been doing on the system, we don't always remember to check in on what's going on in the world, so if you're like us, here are some of the week's social media headlines you may have missed:

Google Gets Dizzy
Google went viral yesterday when the public discovered that typing "do a barrel roll" into the search box triggered a nifty surprise. But that's not the only fun extra the search giant has in store... (via Mashable)

Groupon Goes Public
The king of daily deal sites finally launched its IPO, after a long and rocky road to semi-stabilization. Anyone out there itching to buy a piece? (via CNN)

Flooding in Thailand Could Affect Social Media
The current flooding in Thailand is damaging warehouses where computer servers are made and stored. Companies like Facebook rely on these servers in order to host their sites, and a shutdown in Thailand could mean problems for the social media giants. (via New York Times)

Love at First Check-In
Some smart phone apps are making it easy for singles to set immediate dates with other lonely hearts in the nearby vicinity. With the help of these apps, love really is all around. (via New York Times)

Holidays to Go
According to IBM, the number of people who access online retailers through mobile devices this holiday season will skyrocket, compared to last year. Does that mean we'll see an increase in location-based deals in December? Time will tell! (via TechCrunch)

Oh, BTW, the CIA is Watching
The Central Intelligence Agency is closely monitoring networks like Facebook and Twitter in order to keep a finger on the nation's potentially dangerous pulse. Does this make Mark Zuckerberg a secret agent? (via Read Write Web)