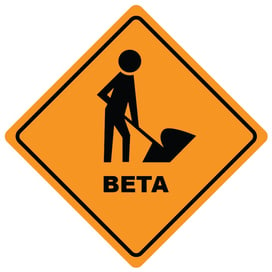 Since beta is the second letter of the alphabet, it is the term used to describe the second phase of software testing. Which means there’s a first phase of beta testing. Any guesses what that phase is called? Bingo: Alpha testing.

Software development is a complicated science, and it often requires quite a bit of testing in order to work smoothly. That’s why we have alpha tests and beta tests. Generally speaking, alpha tests are tests conducted by the software developers themselves, or people closely involved with the software development, who use the earliest versions of the software to make sure the nuts and bolts are all working correctly. Once those tests are successful and the software basics are working properly, it’s time to make the software look nice. When you use Gremln, you’ll see a sleek-looking website that’s easy to navigate and easy to use. That doesn’t always happen naturally. The aesthetic design has to be laid over the complex software structure so that the system is appealing to the eye and easy for everyone to use. Once that design is in place, it’s time for the second round of testing, beta testing.

Beta tests are generally opened up to just a select number of users. It’s the first time anyone in the public sector gets to play around with a new software program, so it’s usually pretty exciting to be allowed to use software as a beta tester. Translation: You get to brag to your friends about how you got to use the software first.

But as exciting as it is to be one of the first people to try out a new product, it’s important to remember that beta tests are tests. The whole point of holding a beta test is so the software developer can see as many flaws in the system as possible and fix them before opening the software to the public at large. Beta testing is important because it lets in brand new people who have never seen the software before and have no preconceived notions about what to expect. Because these beta testers are real people in the real world, they’ll try to use the software the same way that most real people in the real world will. During the beta testing phase, that means finding and pointing out as many flaws as possible so our developers can fix them before we let in the masses. In the words of Gremln president Ryan Bell, “We want you to try and break it!”

We here at Gremln are extremely pleased to announce that we will be opening up for private beta starting today! We'll be granting access to Gremln in groups; first employees, then industry colleagues, then members of the general public who have requested invitations to our beta test. If you haven’t already done so, you can request your invitation at www.Gremln.com. When you receive access, please keep in mind that we’re just testing the software, so it isn’t perfected yet—but with your help, it’ll get there soon!