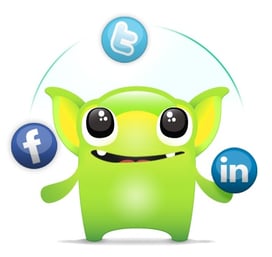 Facebook Introduces a New Metric
Facebook has just launched a new Insight, "People Talking About." This metric looks at a combination of likes, mentions, posts, shares, comments, answers to Questions, and location check-ins. Facebook is rolling out the new measurement gradually to its users--the number of people talking about your business page can be found under the number of people who like your page (and, of course, in the Insights report).

YouTube Gets Political
YouTube has just released a new channel dedicated to all things political. Just in time for the gear-up to the 2012 election, the new channel "will feature political campaign ads, parodies, speeches and a variety of relevant clips."

Steve Jobs and Social Media
This week, we close on Steve Jobs and his remarkable impact on social media. Apple's desktops, laptops, and mobile devices have revolutionized how we interact with each other through various digital media; Jobs' impact on the social media world just can't be overstated.

Steve Jobs and the rise of social media