Next comes the personal information that used to be scattered across the three profile page columns; About, Friends, Photos, and Likes. Also included on the new design is a new feature called Maps. 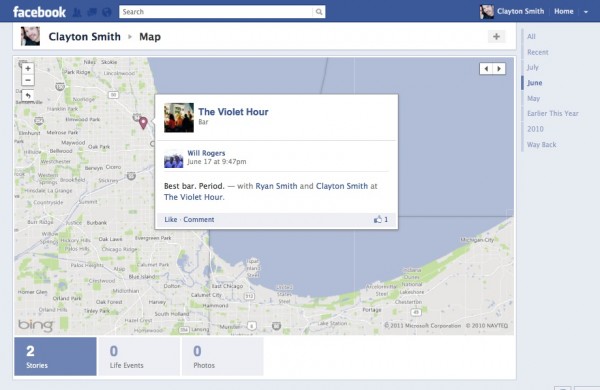 This feature allows you to see a map that pinpoints where your Facebook activity has taken place. You can now tag your status updates and photos with your locations, and they’ll show up on the map. The map also shows where you’ve checked in with Facebook Places in the past, though they’ve recently canceled their Places check-in feature.

Below the personal information section is the feature that gives this Facebook update its name; the Timeline.

The Timeline basically replaces the old Wall design, showing all of your status updates and any activity in which you were tagged. Unlike the Wall, though, which went in reverse chronological order straight from top to bottom, the Timeline splits your historical updates to two sides of a light blue timeline. In other words, instead of scrolling straight down to see what you wrote in the past, now you have to look back and forth from left to right as you scroll down.

One of the more interesting aspects of the Timeline is that you can now add updates to any date in the past. Just click anywhere on the actual timeline, and Facebook will give you the option to post an update on that date on the timeline.

This could be a useful feature if you want to go back in your timeline and insert a changed relationship status, or document an apartment move, or in any other way mark a big moment in life that you didn’t post to Facebook on the day it actually happened. A little clock appears next to the date in any of these inserted, back-in-time posts, and hovering

over it will show you on which date you actually entered the update.

On the right-hand side of the new profile page is an ever-present, small timeline of dates. Clicking on one of these options will automatically zoom you down your profile page to that set of dates and show you the updates you posted way back when. It’s a handy tool for a quick stroll down memory lane.

Aesthetically speaking, I think the update is a nice change. In my opinion, the new profile page looks pretty sharp (although I find that the two-sided timeline makes it a bit difficult to maneuver through past updates). Even so, Facebook is notorious for frequently changing its layout, and the question is, will Facebook users respond well to this change, or will they finally say enough is enough?

We’d love to hear your opinions on the new Facebook profile design. Just leave them in the comments below!